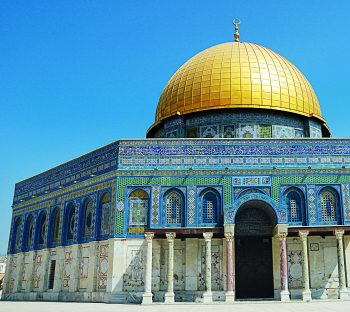 Although there are 11 gates to enter the Esplanade of the Mosques, tourists and non-Muslims can only enter through the Moorish Gate near the Western Wall Plaza, near the Dung Gate. Visiting hours are limited to the following:

A UNESCO World Heritage Site, the mosque is one of the most disputed works in the territory of the Holy Land, and although non-Muslims are prohibited from entering, the building has a long history. It is the third holiest place in the world.

Cupola of the chain

Built in Jerusalem, specifically in the esplanade of Haram al-Sharif, is the oldest Islamic monument that remains and served as a letter of introduction by the Umayyad dynasty. The building was erected with a clear monumental intention whose main purpose was to commemorate the victory of Islam over Christianity and Judaism. It was the first great Islamic architectural building that competed with Christian buildings. The construction starts from the covering of a large rock that emerged from the ground.

The building is richly decorated, especially in the upper area. Originally the exterior was decorated with mosaic and marble, replaced in the Ottoman period by high quality Turkish tiles. However, there are still examples of mosaics in the upper part of the pillars, intradoses, in some spandrels and in the two drums. The preserved mosaics are of paramount importance to understand the further development of this technique within Islamic culture: the first is the non-realistic use of realistic forms and the second the non-naturalistic combination of naturalistic forms. Often the decoration was subject to change, and in this way-and if the artist saw fit-the trunk of a tree could become a piece of furniture with inlaid precious stones.

Its architecture and mosaics follow the patterns of nearby Byzantine churches and palaces,[3] although its exterior appearance has been significantly modified during the Ottoman period and again in the modern period, notably with the addition of the golden roof, between 1959 and 1961 and again in 1993. The octagonal plan of the structure may have been influenced by the Byzantine church of the Chair of Mary (also known as the Church of the Kathisma in Greek and as al-Qadismu in Arabic) built between 451 and 458 on the road between Jerusalem and Bethlehem.[3] The structure is octagonal.

The basic structure is octagonal. It is covered in the center by a dome approximately 20 meters in diameter, mounted on a circular drum supported by 16 supports (4 pillars and 12 columns).[14] The outer walls are also octagonal.

The outer walls are also octagonal.[14] Each is approximately 18 meters wide and 11 meters high. The exterior and interior octagons create a second exterior ambulatory surrounding the interior.

The Jews, who call it Kipat Hasel (כיפת הסלע), claim that this place was where Abraham (Ibrahim) came close to sacrificing his son Isaac by order of Elohim. It was also the place where Jacob saw the ladder hidden in the sky, and where the temple of Jerusalem was located. Other Jewish traditions say that it is the place where the first stone was laid to build the world. Islam also recalls the tradition of Abraham’s sacrifice, although in this tradition the son was not Isaac, but the firstborn, Ishmael.