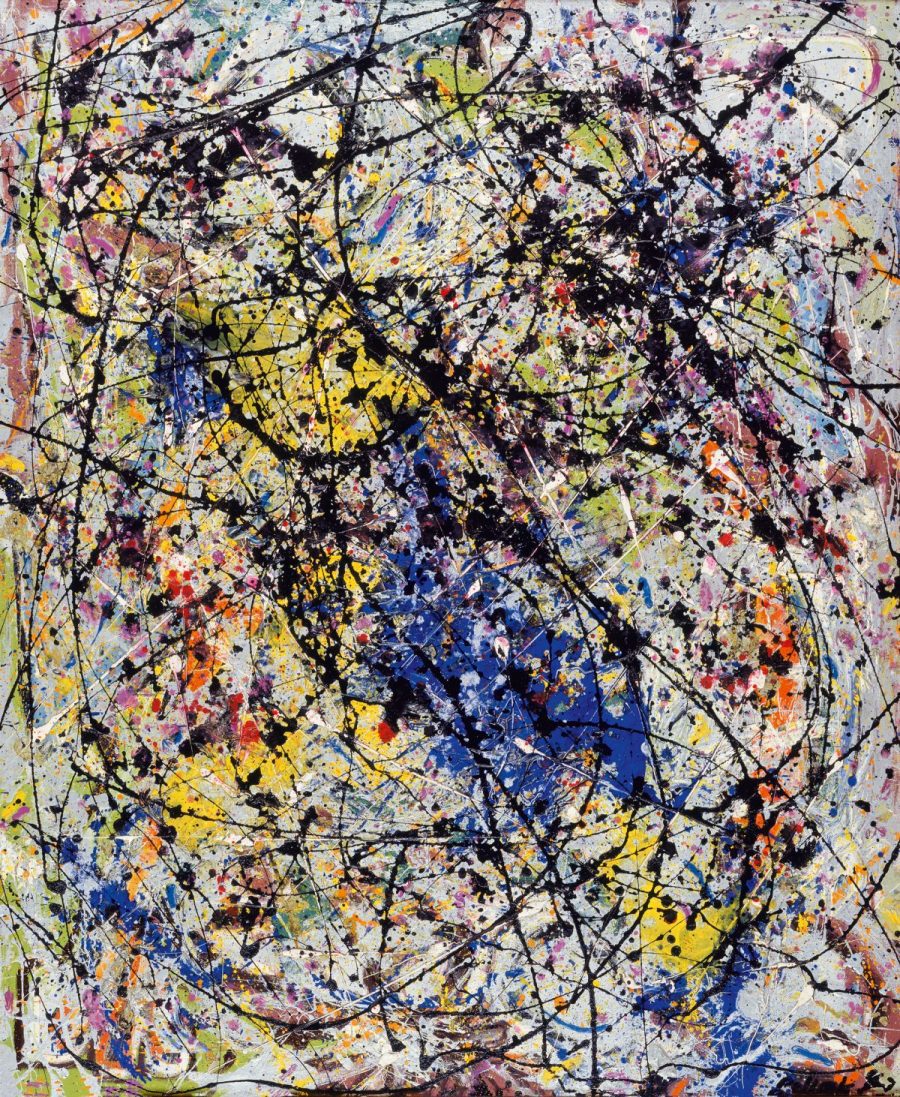 A character who achieved fame and success, however, his life was also marked by “black dyes” due to his growing alcoholism and his drastic mood swings. His fairy godmother was Peggy Guggenheim, she gave him a monthly salary, got him the Long Island house and launched him to fame.

Mural was a personal commission from art collector and patron Peggy Guggenheim, who had signed Pollock. Legend has it that he painted it in one night. This is where abstract expressionism and action painting began.

Mural summarizes the artistic influences that had soaked Pollock from the beginning: the interest in the great Mexican muralists, such as David A. Siqueiros, José C. Orozco and Diego Rivera, whom he had the opportunity to see paint the mural for the Rockefeller Center in New York; and also the deep impression caused by Guernica, which he saw in 1939, first at the Valentine Gallery and then in the MOMA retrospective on Picasso, he also admired Miró and El Greco.

Trying to deal with his alcoholism problem, Pollock underwent Jungian psychotherapy with Dr. Joseph L. Henderson between 1938 and 1941 and later with Dr. Violet Staub de Laszlo in 1941-1942. Henderson hooked him through his art, encouraging him to draw pictures. Jungian concepts and archetypes were expressed in his paintings.[7][8] Recently, some historians have suggested that it is possible that Pollock suffered from bipolar disorder.[9] The artist’s work is also known to have been influenced by his own personal experiences.

If after the First World War the relationship between art and society gave rise to a passionate dialectic between the different historiographical tendencies, after the Second World War the death of art came to be considered inevitable.

At the origin of this idea is a moral revolution: in a society that accepts genocide, extermination camps and the atomic bomb, acts of creation are not possible. War had become the culminating aspect of systematic and organized destruction, an act of making to destroy in a society that defines itself as a consumer society. An art that is consumed by enjoying it may or may not be art, but in any case it will be totally different from all the art of the past. The Informal is a situation of crisis: language is renounced in order to reduce it to pure act. European civilization is a civilization of knowledge (of logos, of the word). It makes acting depend on knowing (“cogito ergo sum”). On the other hand, American civilization is a pragmatic civilization, of action (“I exist because I do”). In the clash of both conceptions, reason, the word and knowledge, loses the battle against politics based on force. Why, then, continue to oppose the utopia of reason to the brutal realism of power?

Composition No. 1 is a work of enormous dimensions, the size of which is intended to imitate a brick wall. The canvas is completely covered with color in a stylistic expression of an absolute horror vacui that will be a characteristic element of Pollock’s work and of other members of abstract expressionism.

The colors are used directly as they come out of the tubes. Pollock uses pure colors, red, white, black, with which he forms lines that curve sinuously over each other, showing a paroxysmal rhythm. There is no motif to focus the viewer’s gaze, but the viewer’s gaze is limited to passing over the entire surface of the painting. It is a total work to be enjoyed in its entirety. This painting is an image of an almost apocalyptic intensity thanks to the speed and the psychic energy of its execution, which are palpable in the painting.

For the elaboration of this painting, remarkably transparent despite the many layers of color. Pollock marks the lines with a certain rhythm that he controls by dropping the paint on the canvas, placed directly on the ground, using a perforated can or brushes overflowing with paint. It is the technique of “dripping” (drops and splashes of color), which leaves a wide margin to chance.